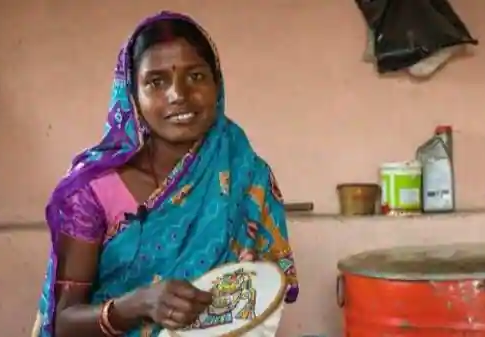 Literacy India is the outcome of an effort that began in 1996 with five children at a construction site in India’s then developing Millennium City- Gurgaon. Today, that idea has blossomed into a nationwide program, uplifting the lives of over 7 lakh women and children through its 106 centers.

As with anything good, the beginnings were tough. In the mid- 1990s, the nation had just undergone a huge economic shift in the form of liberalization and globalization. This magnified the need to work towards upliftment of migrant workers who were flocking the cities along with their family and children without any inkling about their basic educational requirements. Therefore, the first project of Literacy India called Pathshala was initiated. The aim of the project was to bridge the gap in education of its pupils so that they could be enrolled in traditional schools. The open method of the classes, coupled with alternate teaching methods like songs and games helped ensure engagement in the classroom.

The growth of the project brought with it a new set of challenges. It was quickly realized that there were not enough trained teachers to keep up with the booming number of enrolments. However, LI Founder, Captain Indraani Singh’s vision to introduce technology as a tool for Literacy India aided not only the training and development of human resources, but also helped in bringing up the retention levels of students in schools.

Success in the classroom inspired confidence in Literacy India to think big. Consequently, the work of Literacy India expanded to impart market-oriented skills to women. The project Karigari was started that aimed at training artisan and non-artisan women and help them become financially self-sufficient. Currently, the program runs in six states through its 27 centers with over 80,000 beneficiaries.

Soon it dawned upon LI that even though the younger trainees were able to get gainful employment, the older women were unable to participate freely due to social restrictions and burden of family responsibilities. This led to the introduction of Project Indha which is an entrepreneurial programme that aims to create community-based livelihood enhancement models.

MasterCard is a leading global technology company in the payment industry that has been Literacy India's partner for more than a decade since 2012. It gives novel direction to women especially in the geographies where Literacy India is working under sustainable livelihood programs at the grass-root level community. Both of them have a common objective of unlocking the economic potential of women entrepreneurs. Their community project empowered and changed the life of 25,000 women, youth, and children from deprived and vulnerable families. MasterCard works along with Literacy India in implementing the 4E's.

The Kaigari project provides a platform to connect ethnic and folk artisan's traditional skills with modern-day handicraft items under the banner of Indha. The products made by these upskilled and trained artisans are sold by Project Indha on leading platforms like Etsy, Amazon and Flipkart. MasterCard has an important role in building Indha women as skilled artisans. This support has helped change the lives of women in extreme rural pockets of West Bengal, Telangana, Jharkhand, Uttar Pradesh, Rajasthan, and semi-urban areas of Delhi, NCR, Pune, Vadodara, and Kolkata.

Menoka Hembram is an embroidery artisan under project Indha (www.indha.in). She lives in Madandih, District Dhanbad with her family. Her husband works as a labourer. During the pandemic, her husband lost his job. During this time, Literacy India helped them with some essential food and gave Menoka extra work through Indha. The advance paid by Literacy India helped her during lockdown and now she is making regular earnings as a successful artisan of Indha. For many, Indha has become a brand of sustainability and women empowerment. Artisans like Menoka become producers for B2B corporate gifting with active support from a not-for-profit like Literacy India’s project Indha.

Pappi Bai is breaking the rules and charting her own path towards financial independence. A few years ago, she left her husband considering the safety and well-being of herself and her children to her father's home in Manoharthana village, District Jhalawar. Her father was a daily wage labourer. The arrival of his daughter and her children made the financial crisis even worse. Pappi completed a tailoring course with Literacy India and started working as an Indha artisan in patch making and stitching. Literacy India provided Pappi with a sewing machine and she successfully managed to support her family.